So, I happen to find myself with a lot of free time at my disposal. Having spent the last three years head-of-teching in a startup I also have finally the time to think about the technologies we used, the shortcomings, the pitfalls and what I would do different on the next project.

Turns out that I really fell in love with Vert.x as a technology, Java 10 and RxJava2. As you still can see on GitHub we build an awfull lot of components around that. Vert.x is just blazingly fast and easy to understand, RxJava makes for nice reactive streams and modern Java is just fun to work with.

We also had a couple of Spring Boot services, mostly for simplicity and the hype four years ago. In general Spring Boot brings a lot of features, most of them you don’t need or don’t know. It is also quite slow when it comes to startup, in a container, on a VM, in the Cloud.

We mostly used a stack based on Vert.x, RxJava (sadly 1.x) and Vert.x Jersey. We glued it all together with a couple of abstractions over Verticle deployment and got our own nice stack this way.

Things I would (and have done with newer services) is using RxJava2 as well as replace HK2 with Guice. HK2 is nice but also slightly inferior to Guice in my opinion. For some reason HK2 is not that well maintained, as of last week there was still no support for Java 10 in a released version.

And now I am wondering if I should take this whole stack to a new level and build something like Vert.x Boot, a system that easily lets you bootstrap Vert.x microservices for a variaty of use-cases with the following features:

On top of that there should be some modules to integrate with commonly used data layer services and provide the infrastructure that you usally use around that, like connection pooling and schema migrations:

I used to say that Java is not a great fit for Microservices because of memory usage and startup times, but with this stack it might actually make sense. I haven’t yet figured completely out how low you can go, but with a very low old-gen baseline and requests that always run only in your young-generation you can actually run those things with a very small memory footprint.

Maybe that is something to fill my time with once the summer ends. 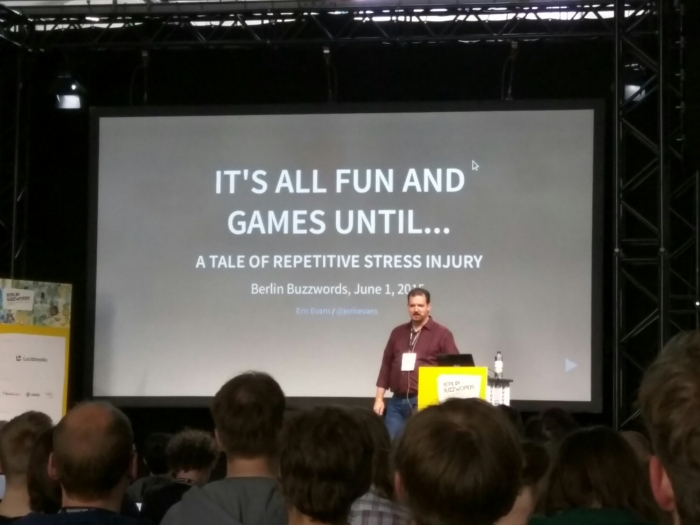 It’s All Fun And Games Until…: A Tale of Repetitive Stress Injury (Eric Evans)

Stress injuries is no joke. We only have one health. Thanks, Eric. Now I have all the symptoms 🙂 #bbuzz pic.twitter.com/S9VJMb0JbH 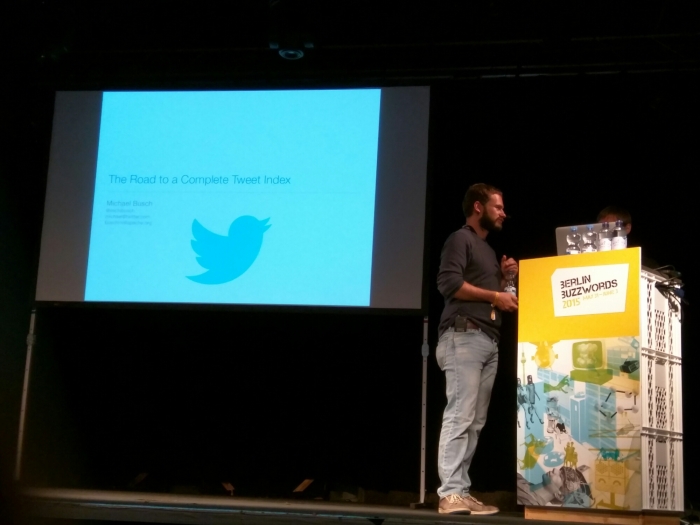 Michael Busch has given this talk in one version or the other for a couple of years now. Unfortunately it got more shallow now, not so many technical details about how they optimized Lucene for Twitter. Numbers are great, they have two billion queries per day and about 500 million tweets per day. One thing that he didn’t mention in his earlier talks is that they actually figured that Earlybird does scale to Twitter level requests due to the Earthquake in Japan when they had to emergency shutdown the caching layer in front (which was Ruby on Rails and did not scale that well). Nowadays they have all tweets in a pretty vanilla Lucene with some additions (going to be open sourced soon) and use a Mesos cluster in case they have to reindex all the data. 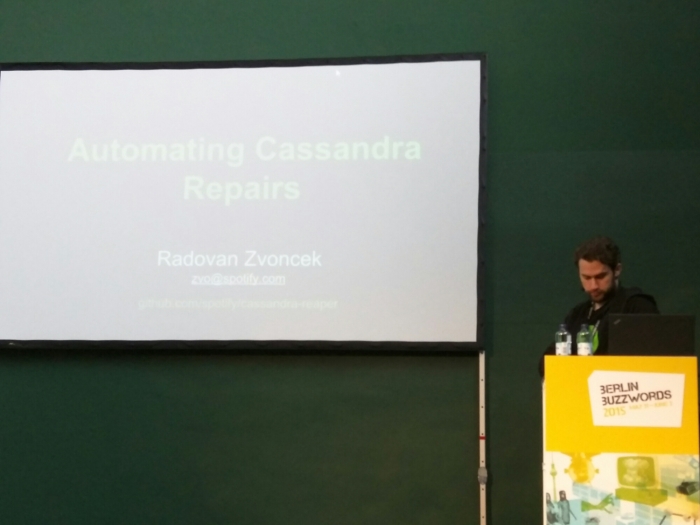 First time speaker Radovan did a pretty good job. Apparently there are several ways to get to the “consistency” of the “eventual consistency” in Cassandra, which are Read Repair, Hinted Handoff and full blown anit-entropy repairs. The latter ones apparently can lead to a lot of problems if done improperly, so Spotify build something to manage that: Reaper.  The problems are usually due to disk IO limits, network saturation or just plain full disks. Spotify Reaper orchestrates anti-entropy repairs to make them reliable.

I’m still somewhat confused that one aparently has to spend a lot of time repairing Casandra clusters. I always thought that was what Cassandra was doing.

For all the people who forgot, like me, how ES clustering works this was a good reminder. Plus I learned that discovery is pluggable, so you can write your own plugin to provide the clustering part for ES. He apparently did and wrote Eskka, an Akka based clustering approach. Writing your own apparently isn’t that much fun because APIs change all the time. Just in case you forgot, Zen is the default way ES clusters. 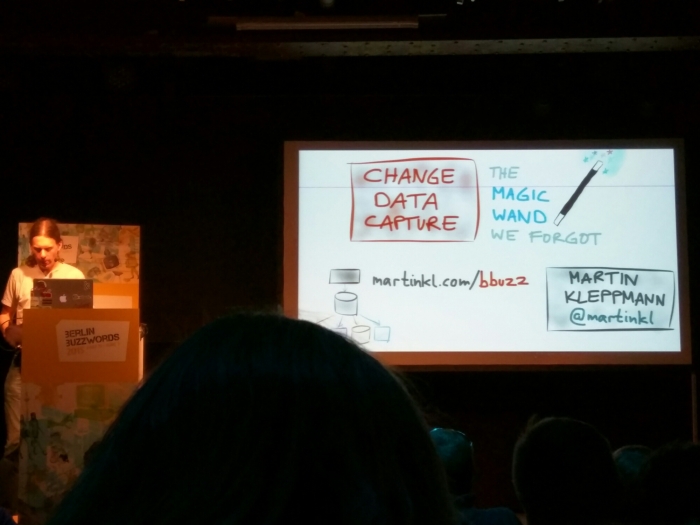 Highest buzzword per second speed so far on #bbuzz by @martinkl Change Data Capture. A simple idea found a courageous man to get it shaped.

We all know the problem Martin was describing: same data in different form, like in your database, in your cache, in your search engine. He went back to the “Change Data Capture” principle, which basically says “save once, distribute everywhere”. So in order to realize that he wrote a PostgreSQL plugin “Bottled Water” which gets the changes from Postgres and posts them to a Kafka topic. Yay for the best project name this year in the category: will never find that on google.

His implementation and idea is solid, the problem is that it is a Kafka topic per table, so you actually loose the transaction when reading from Kafka. Otherwise it is transaction save, messages are only sent when the transaction in Postgres commits. He uses Avro on the wire and transforms the Postgres DDL Schema to an Avro schema.

If you want to get your transaction back you would need a stream processor (Storm/Spark) downstream to reassemble your transactions. Might be a good idea if you already have a Postgres DB or rely on some special properties of a centralized Datastore, otherwise it is OK if your microservices write directly to Kafka.

Has someone actually coined the word “nanoservices” yet for designs that basically do just one thing? Like take the request, write it to a queue (Kafka) and all other processing taking place by consumers down the queue that do just one thing as well.

Elasticsearch is rewriting the way they do distributed indexing based on the Raft Consensus Algorithm. Sounds great, they are mitigating a lot of problems they do have right now. 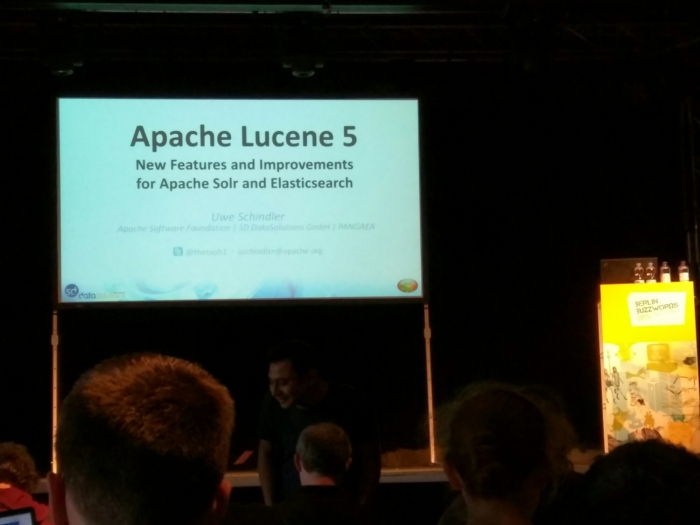 Apparently, Lucene 4 broke a lot of indexes due to it’s build in backward compatibility to Lucene <=3. With two big companies actually relying on Lucene, that kind of amazes me.

Lucene 5 gets rid of all this legacy stuff and drops support for older indexes. Plus it adds a lot of data safety features when it comes to on-disk indices like checksums and sequence numbers. So, Solr and Elasticsearch should finally be production ready …. ;).

JDK seems to keep breaking Lucene (remember that the initial JDK 7 release broke Lucene?), apparently one should not use G1 GC with Lucene (es? Solr?).

And Lucene 5 uses a lot of the “new” JDK 7 APIs for IO to finally get the index safely to disk.

Less distributed, more of Real-Time monitoring. Apparently they build their own system for analyzing their loggs for anomaly detection, punnily named Anna Molly, which was open sourced now.

They made pretty clear that thresholds are not enough if you have a highly dynamic system that can change on multiple dimensions any time. Seasonality of your date makes it even harder to define useful thresholds. There are a couple of algorithms which can be used for anomaly detection, namely Tukey’s outlier detection and seasonal trend decomposition. And T-digest comes to the rescue of course.

For monitoring they actually use a cascade of statsd and carbon.

The winning buzzword at #bbuzz 2015 seems to be anomaly detection. Find all the anomalies in all your data! 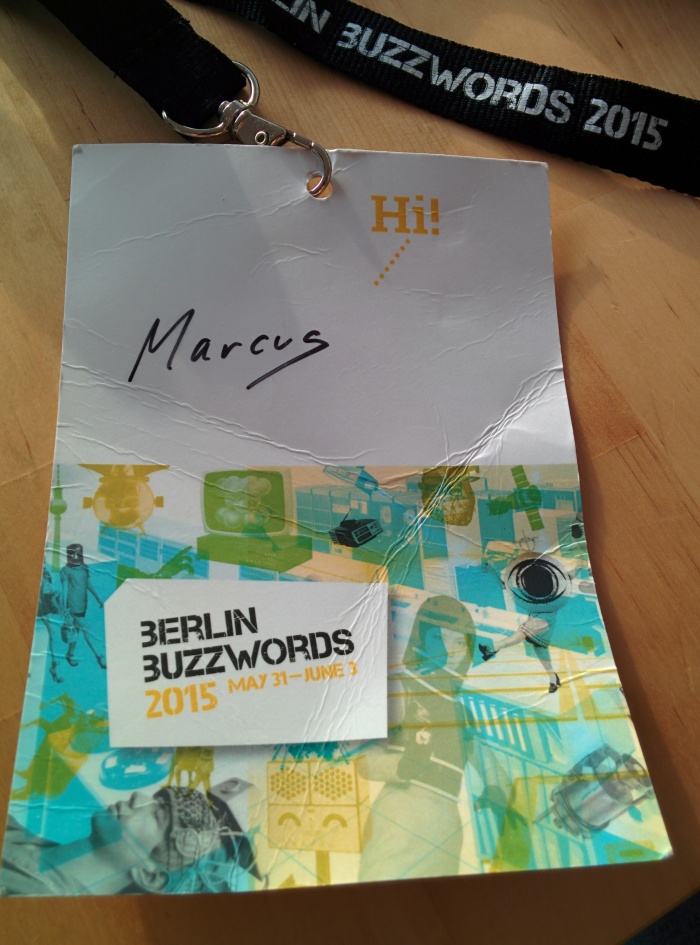 Analytics in the age of the Internet of Things (Ludwine Probst)

Basically a talk about analyzing a demo dataset from sports activity via Spark. Not so much new stuff in there, but beautifully manually illustrated slides. 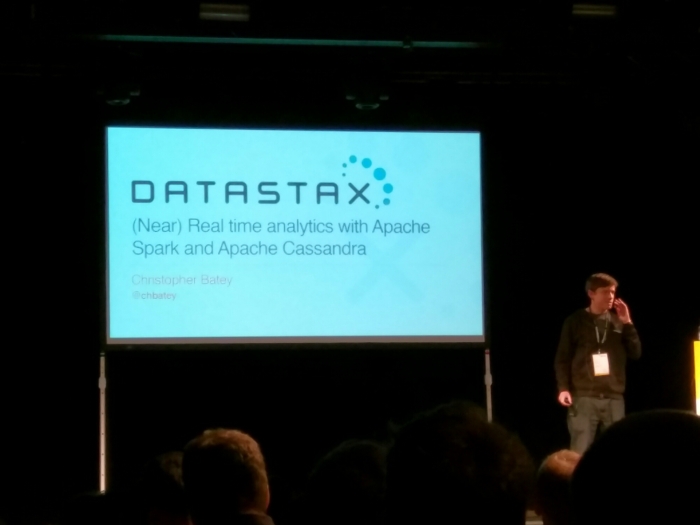 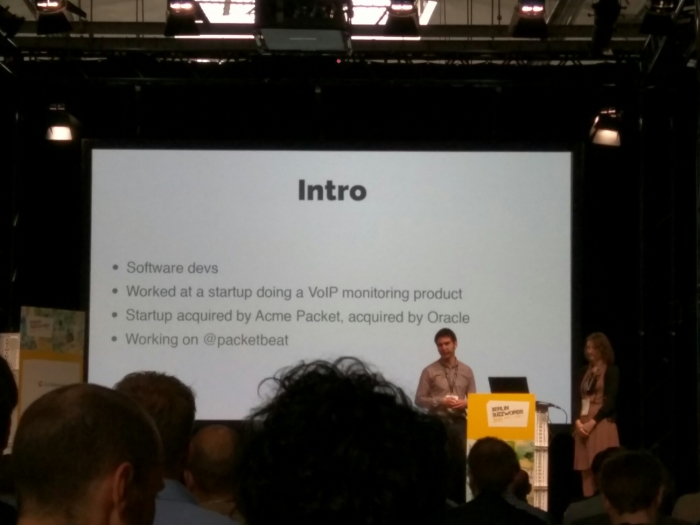 Packetbeat, which apparently just joined Elastic, is a TCP Layer application monitoring solution. So what they basically do is understand your protocol (HTTP, Redis, Postgres) and give you metrics directly from the traffic (how long did my HTTP request take?). Sound really interesting, as it doesn’t need any integration. Will be integrated into the ELK-Stack and get some more data providers. I really like the idea.

t-digest is an algorithm to get realtime quantiles/percentiles out of your data. That comes in handy if you want to have the data always at your fingertips and/or want to identify outliers. It is blazingly fast and needs constant memory, so you actually want to have it wherever you have numbers. Of course there is a Java-Library and an integration into Elasticsearch. Awesome speaker as well.

Basically a long reminder to RTFM. Know what data you need, now the pitfalls, disable features you don’t need and make sure that your cluster setup fits your requirements.

Detecting Events on the Web with Java, Kafka and ZooKeeper (James Stanier) 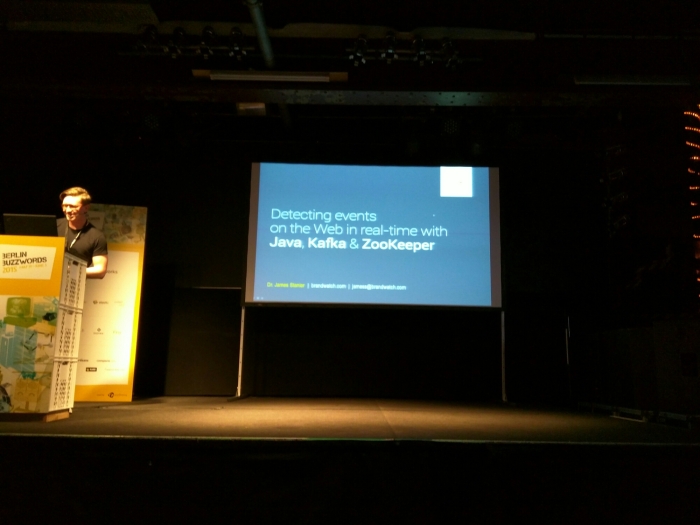 Good speaker, I think they build quite interesting stuff at Brandwatch. It was not clear to me till the end why the built all that stuff themselves, but I think they co-evolved with Storm/Spark and just made their existing software cluster aware rather than rewriting the stuff.

@mthiesen Thanks for the write-up! Indeed – we co-evolved with some of these technologies (in fact, we have had our crawlers since '06!)

Reminded me that there is Apache Curator, a set of high level abstractions for Zookeeper services (https://curator.apache.org/)

IBM is using Spark. Basically they got a pretty standard setup to get a lot of data from Twitter and enrich/augment that with some of their proprietary tech (mood detection etc.). Nothing special here.

Actually a pretty good speaker, but I didn’t really get the whole point. He basically explained that you should use the same big data techniques for analyzing the data that comes out of your operations measurements (and btw, he has a company specializing on that). But it wasn’t a sales talk. So basically, yes, analyze all the data. 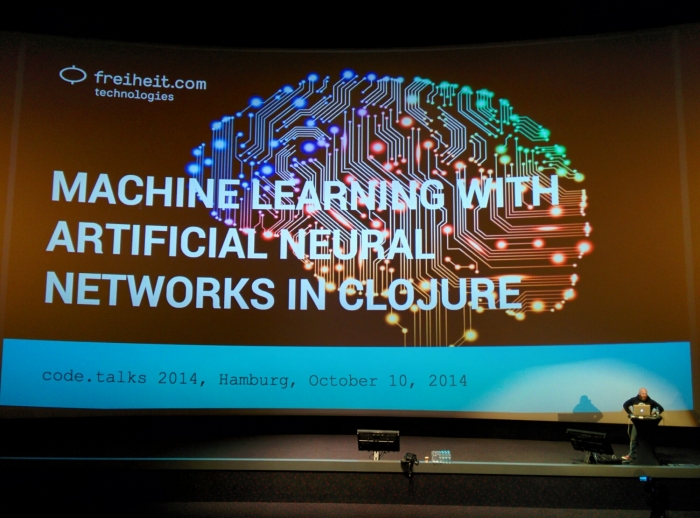 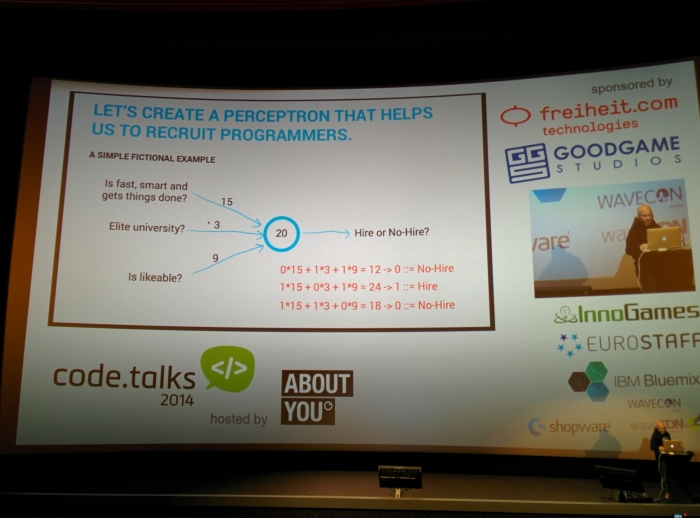 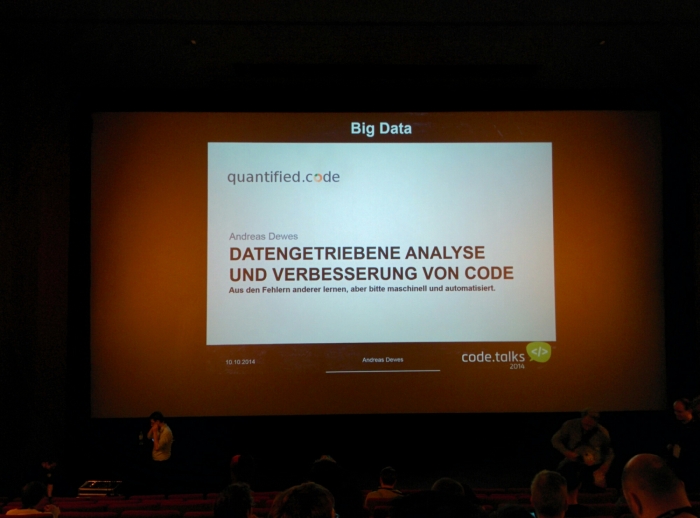 Guerrilla software design: doing it wrong and getting it right
Marco Cecconi 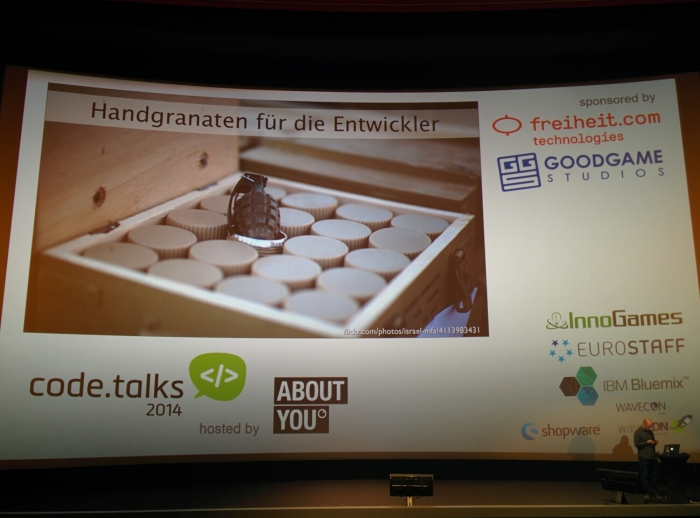 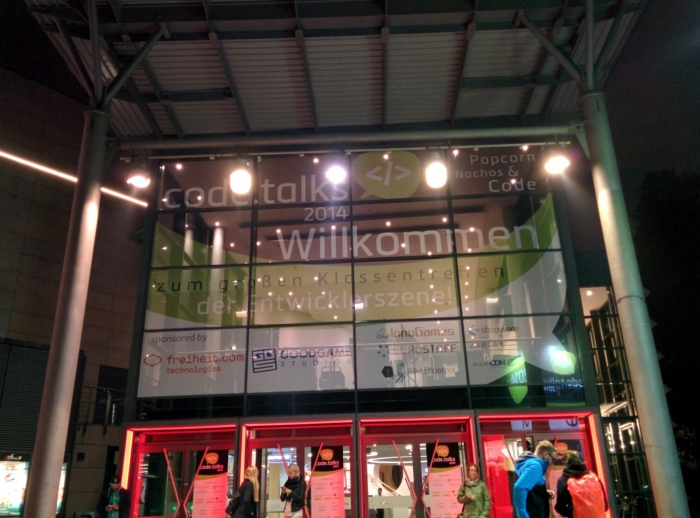 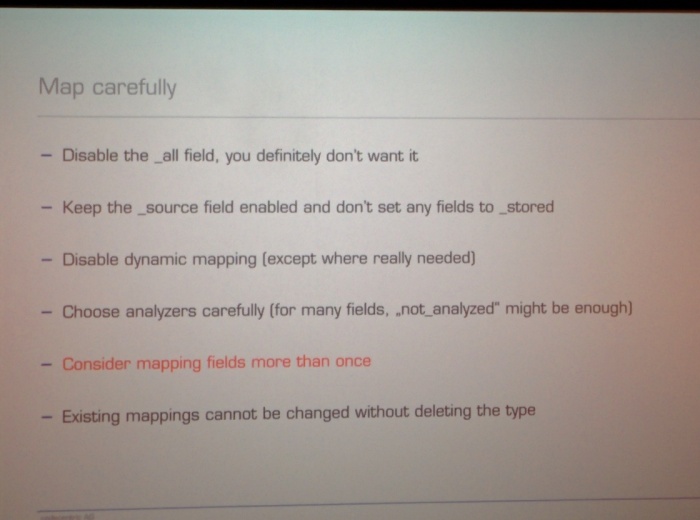 WebAPI – expand what the Web can do today
Carsten Sandtner 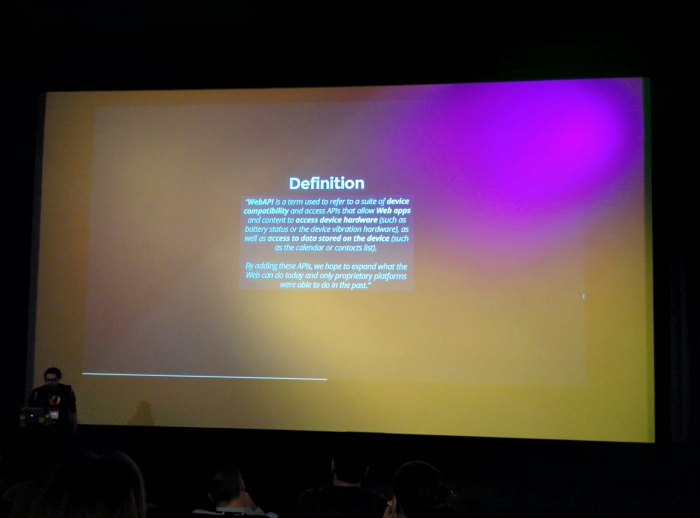 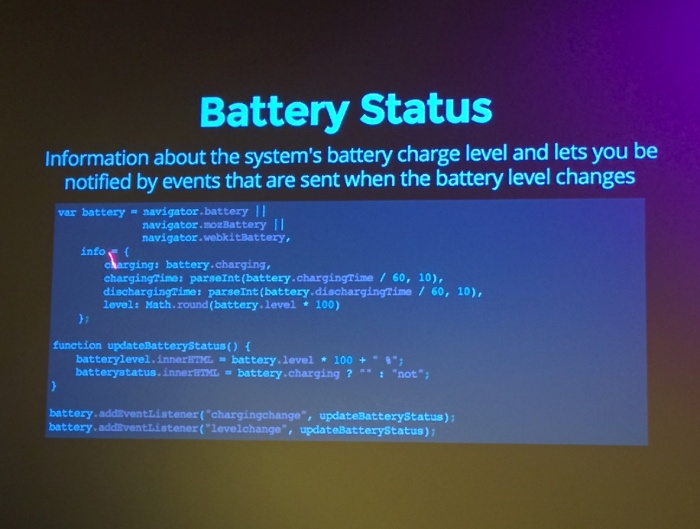 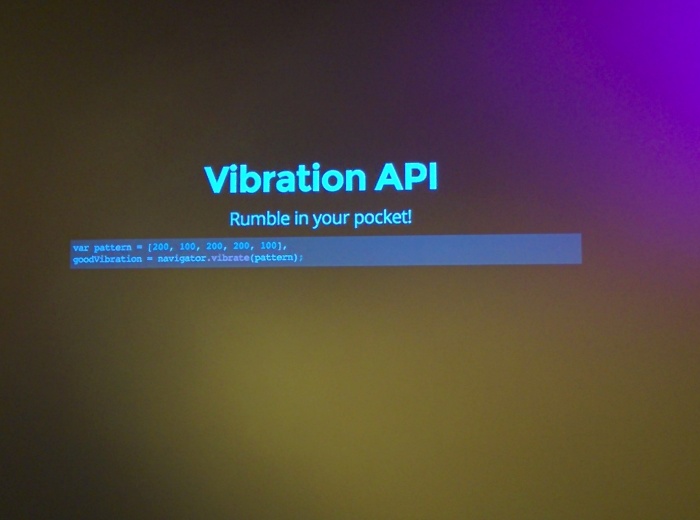 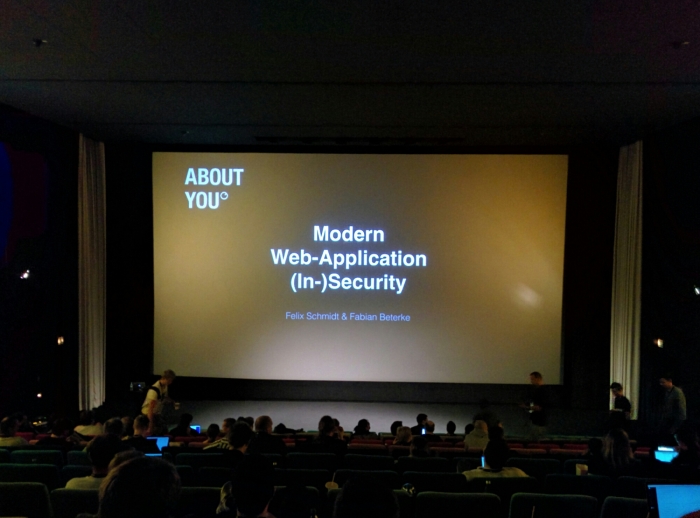 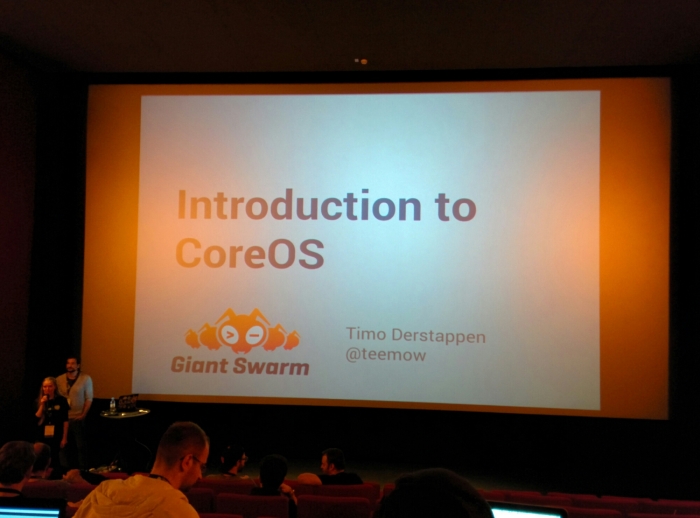 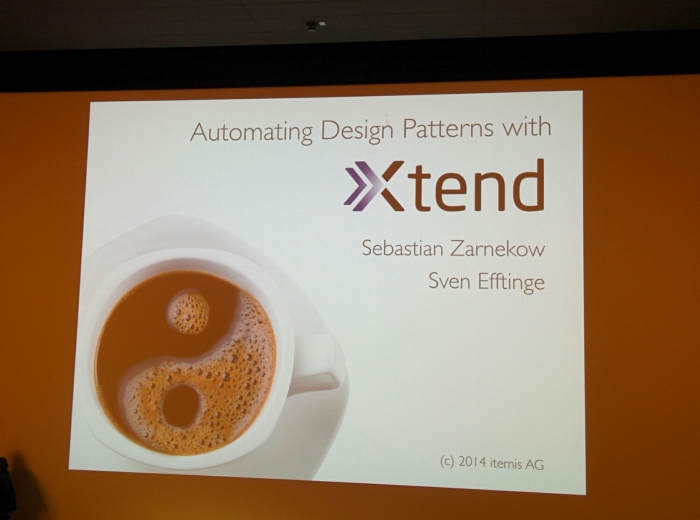 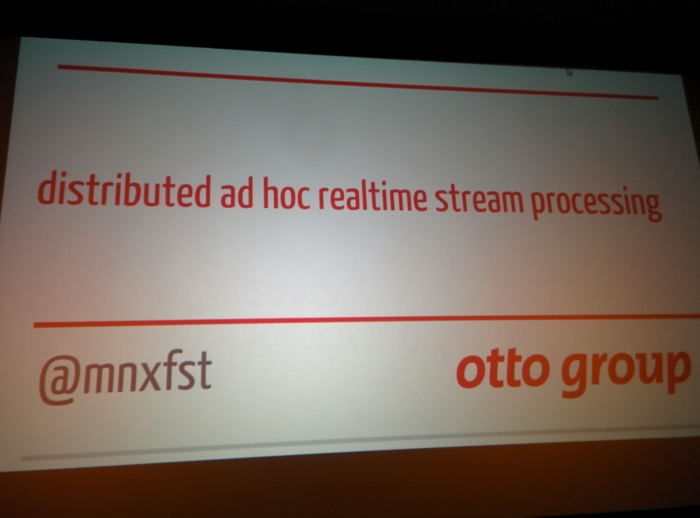 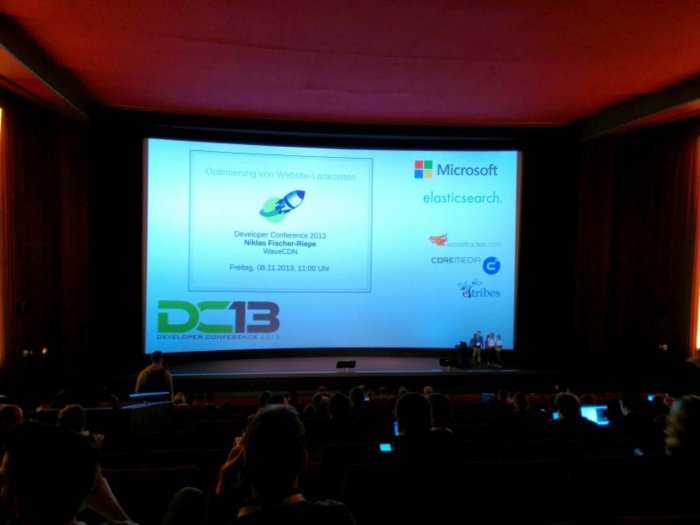 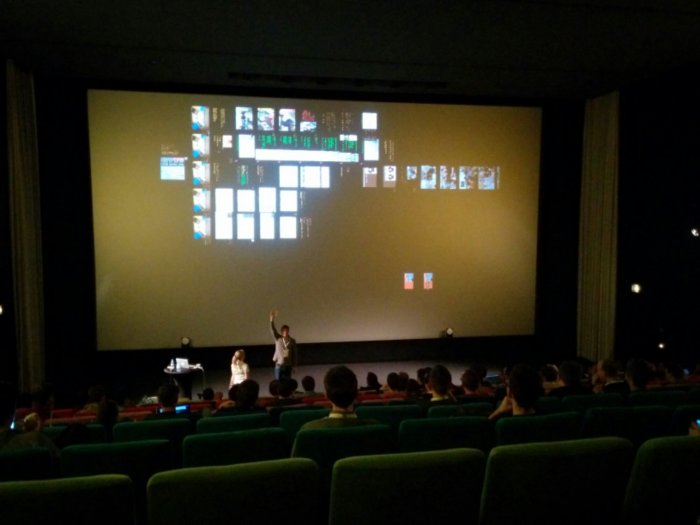 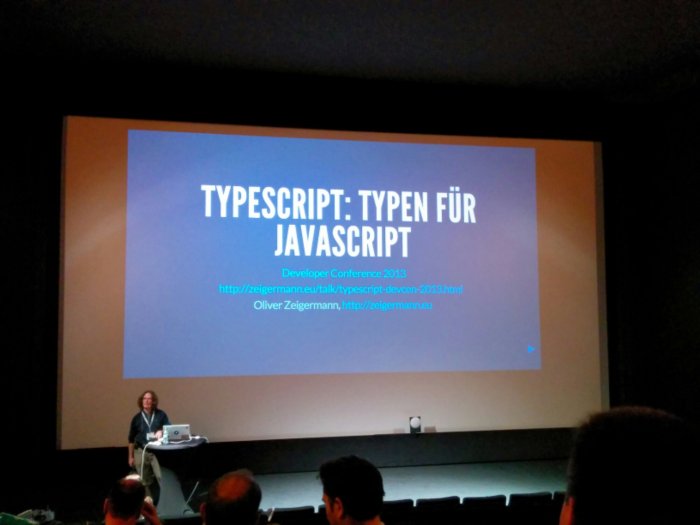 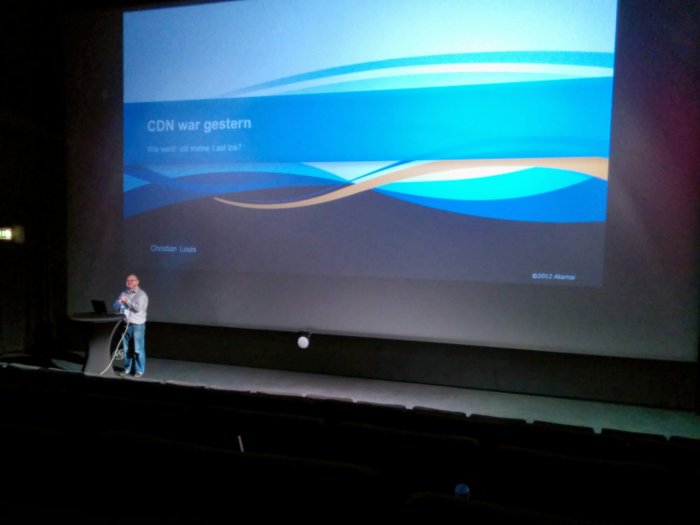 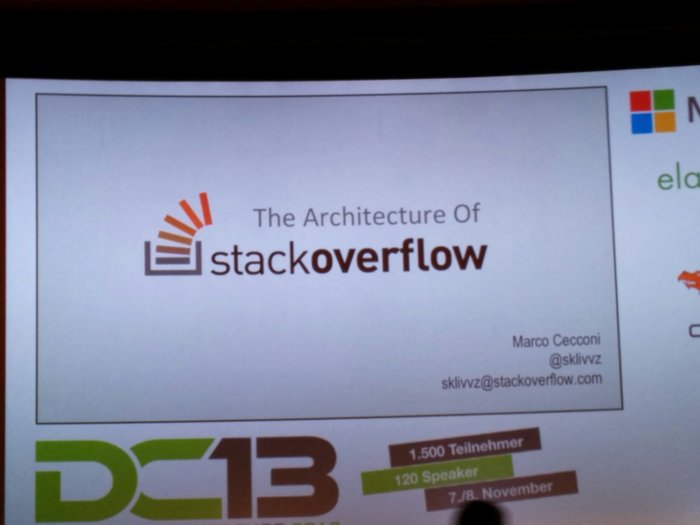 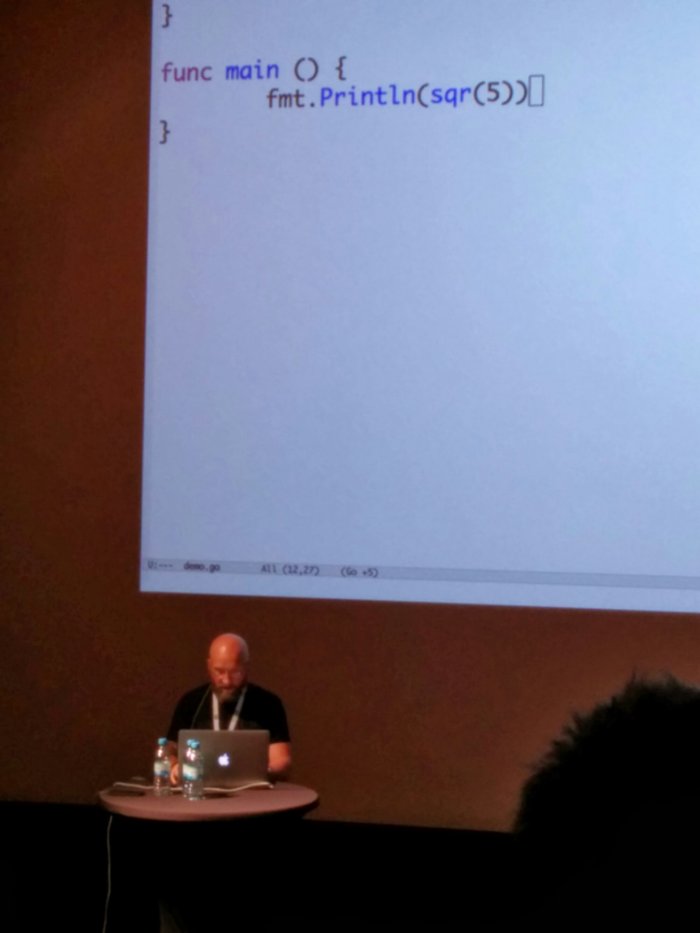 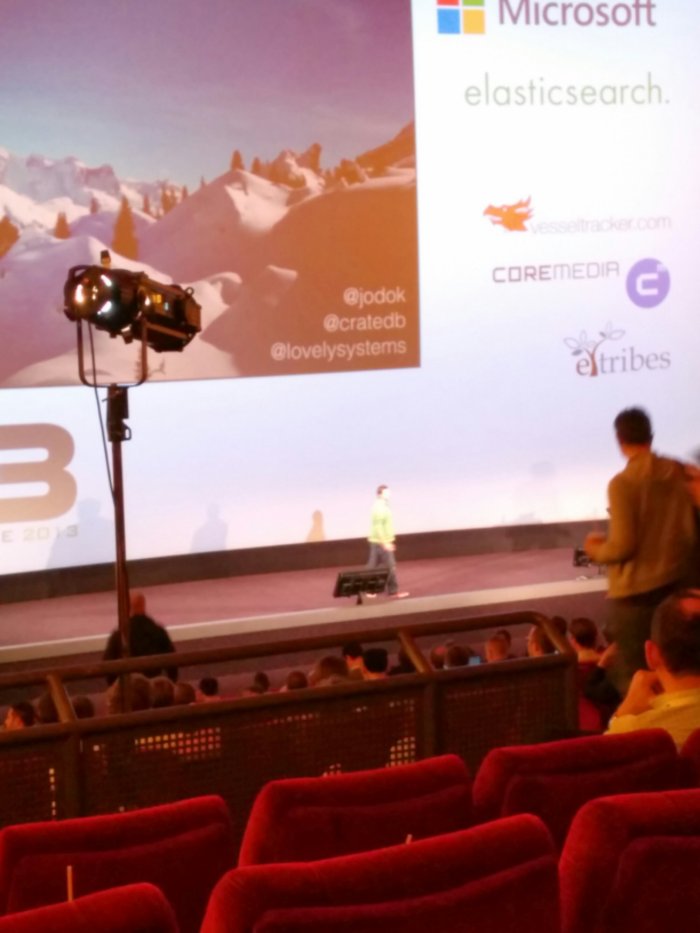